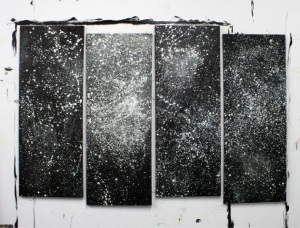 I’ve been interested in theoretical physics since reading Neal Stephenson’s Anathem a few years back. The first picture is of a painting idea I’ve been working with since 2001. I think about how it’s made. I think about the other people who’ve made work in a similar manner. I think about the differences and similarities in the content of all of the variations of this style of painting and any painting style that’s ever existed. I want to show four dimensions existing simultaneously in a single work of art.

The second [buddy] picture is, I think, the same thing though it’s vastly less comfortable for me to look at and was pretty difficult to make. It seems to be the same painting as the first picture but maybe from another version of reality. Or like Paul Klee and Joan Miro made it with me.  -Matt Jones, 2012