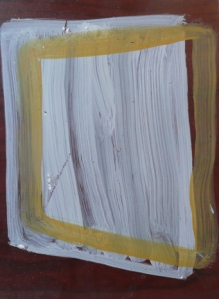 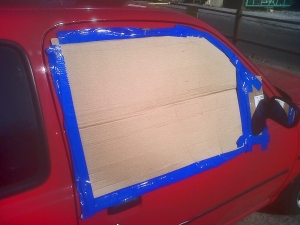 I should perhaps say from the outset that I do not consider myself a photographer, I am not concerned with taking ‘good’ photographs, I just take ‘snaps’, like the majority of people with a mobile-phone camera, documenting what catches my eye (these are sometimes employed on my blogs). My primary practice is as a painter, working on small abstract paintings. I think of these activities as distinct and autonomous but I feel instinctually one will inevitably inform the other, from time to time.

Over the past year or two I have often taken photographs, whilst out walking with Betty my dog and this picture was taken the other month. I suppose looking at the images it might be expected that I took the photograph and later it influenced me when I made the painting. However, it wasn’t until sometime later that I spotted a sort of resemblance to the painting – which was completed some months previous to the picture being taken. Beyond immediately being drawn to the strong colour elements of car and tape, I now suspect that probably the very forms themselves (made by the cardboard and tape) resonated within me, appearing somehow familiar and this contributed to drawing me to it as an image.  -Terry Greene, 2012